The Spring is an item in Super Smash Bros. Brawl. It is a purple and yellow spring. It appears in the game regularly. When it falls onto the stage, players and opponents can jump on the Spring to jump higher than usual, which can help them or hurt them, depending on the environment and obstacles. However, the Spring isn't as promising as it looks, for it has a disadvantage :O. If the Spring is tipped over on its side, (usually due to certain attacks) it will launch players sideways instead of the usual upwards. This Spring also has its own Trophy in Super Smash Bros. Brawl. There is also another Spring that does not appear as an item, but appears during certain attacks. Let's go with Sonic's Spring, which serves as his up recovery move. If Sonic's Spring is used on the ground, it will remain there for a couple seconds. Sonic and his opponents can use this Spring to bounce higher than usual until it disappears. However, if Sonic's Spring is used in mid-air, it will fall to the ground and disappear, damaging any opponents that it hits. Springs appear in the stage, 75m as damaging obstacles in the game. Even though they are difficult to avoid, they cause great Damage and Knockback. A Spring also appears in New Super Mario Bros. Wii as an item. However, it is not a common item and only appears in levels where it is needed. When jumped on, it obviously bounces Mario (or Luigi, Blue Toad, Yellow Toad) high in the air. By pressing the 1 button and shaking the Wii Remote, one can carry the Spring with them. This can help since the player can carry the Spring to a location where it is needed (such as to reach a Star Coin or other item). Springs appear in Super Mario Galaxy and Super Mario Galaxy 2 known as Springboards. There are two types: blue and orange. The blue Springs can be used by simply jumping on them and the orange ones can only be used by Ground Pounding on them. Both Springs can obviously be used to bounce Mario/Luigi higher than usual, and both Springs aren't very common in the game. Springs also appear in Donkey Kong Country Returns attached to platforms, especially in the Cliff, where they are most common. By jumping on them, the Kongs (Donkey Kong and Diddy Kong) can bounce extremely high, but they must be careful. This is because in certain conditions, the Kongs must try not to bounce too high, otherwise they can end up touching harmful obstacles, such as Spikes. To control how high one jumps on a Spring in DKCR, they must press the 1 button on the Wii Remote either softly (to bounce low) or roughly (to bounce high).

The Spring's Trophy in SSBBEdit 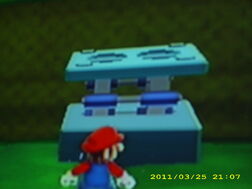 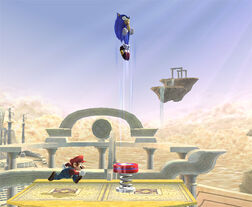 Retrieved from "https://wii.fandom.com/wiki/Spring?oldid=16799"
Community content is available under CC-BY-SA unless otherwise noted.