Spiny Shells, also known as Blue Shells, are blue shells with wings in Mario Kart games. As their name implies, they have seven spikes on their hexagonal plates (though only four are visible on winged artworks, while six are visible on wingless artworks). Only in Mario Kart Super Circuit, Spiny Shells don't have wings. The Koopa who owns this shell is unknown. Spiny Shells are not as common as theRed Shell or Green Shell, however, they fly swiftly to the character in first place. Once they do reach the character leading the line, it explodes, sending you upwards. The games warn you when it is coming for you. In Mario Kart Super Circuit, it appears behind the character behind them and flips them. Spiny Shells are nearly impossible to dodge unless one hits you, and you have the Starman's invincibility. Spiny Shells are lost once you have been hit by a POW Block,Starman, or Lightning. That means you must throw them as soon as you get them. Who knows what is coming for you. A Spiny Shell's explosion is blue in color, as if you were hit by a blue Bob-omb in Battle modes. It is funnier in Mario Kart Double Dash!! since the character on the back cries for a while.

A Spiny Shell's blue explosion can be seen ahead of Mario in Mario Circuit (MK Wii). 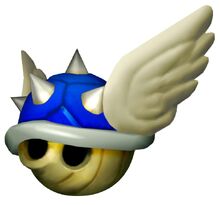 This is a Spiny Shell in Mario Kart: Double Dash!!.

This is a Spiny Shell in Mario Kart: Super Circuit.
Add a photo to this gallery
Retrieved from "https://wii.fandom.com/wiki/Spiny_Shell?oldid=20828"
Community content is available under CC-BY-SA unless otherwise noted.