A particular stubborn breed of Koopa. Lakitus chase Mario aboard clouds and attack by throwing Spiny Eggs down from above. More recently, Lakitus have taken over the role of cameramen, filming with cameras that they dangle from long rods. Spinies are Koopa creatures with tough, spiked shells. Jumping on them has no effect, but fireballs can dispatch them.

This is the Spiny's Catch Card from Super Paper Mario. 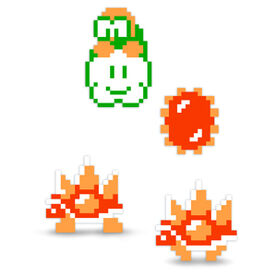 This is the artwork of Lakitu and the Spinies in Super Smash Bros. Brawl. The red ball above the second Spiny is a Spiny Egg in its 8-Bit, Super Mario Bros. form. 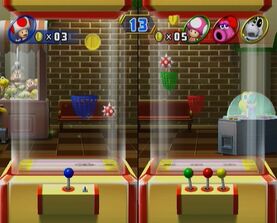 Look carefully (click the picture for a bigger, better view if needed). Two Spiny Eggs can be seen. This is in the minigame, Grabbin' Gold from Mario Party 8. 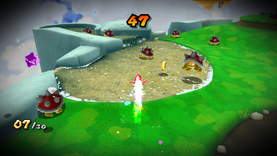 Rainbow Mario is surrounded by many Spinies in the Yoshi Star Galaxy's third mission. This is in Super Mario Galaxy 2. 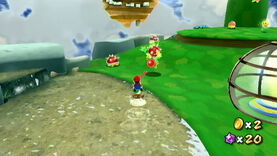 Look carefully (click the picture for a bigger, better view if needed). Some Spinies can be seen in the background of this picture. This is in the Yoshi Star Galaxy of Super Mario Galaxy 2. 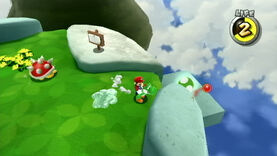 A Spiny can be seen behind Mario and Yoshi as they near a 1-Up Mushroom. This is in the Yoshi Star Galaxy of Super Mario Galaxy 2. 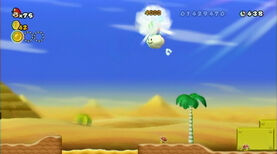 Look extremely carefully (most likely, you are going to have to click this picture for a bigger, better view). To the right of the Quicksand pile (where the palm tree and yellow platforms are) two Spinies can be seen walking on the ground. This is in World 2-5 of New Super Mario Bros. Wii.

This is a sprite of a Spiny from New Super Mario Bros. Wii. 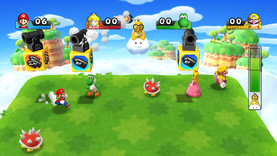 Some Spinies can be seen during Lakitu's boss battle in Sock It to Lakitu of Mario Party 9.
Add a photo to this gallery

Retrieved from "https://wii.fandom.com/wiki/Spiny?oldid=16088"
Community content is available under CC-BY-SA unless otherwise noted.