POW Blocks are blocks with the word "POW" on them. They appear in Super Mario Advance, New Super Mario Bros. Wii, Mario Kart Wii and more games. They are also an item in the minigame Mario Bros. Some POW Blocks are brown like in Super Mario Advance (see picture below), while others are blue. When they are thrown, they make Sound Waves on the ground (or ground pound the ground) knocking off all the enemies in sight. In Mario Kart Wii, the POW Block plays its same role, ground pounding the ground. It ground pounds three times, the last pound the hardest. When this happens you drop all the items you were holding as your kart/bike spins around. The last hit is similar to hitting an invisible Banana since your spin around. POW Blocks appear for the first time in the Super Smash Bros. series as items in Super Smash Bros. For Nintendo 3DS / Wii U. They can be used three times, similar to in other Mario games, such as Mario Bros. When used, they will shake the ground, flinching all players except the one who used it. Players with high Damage percentages or Damage Ratio/Handicap will take more Knockback with each pound, resulting in more KOs. 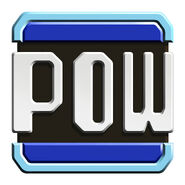 Many types of POW Blocks.

A POW Block in Super Smash Bros. For Nintendo 3DS / Wii U.

MegaMan surrounds himself with three POW Blocks. This is in Super Smash Bros. For Nintendo 3DS / Wii U.
Add a photo to this gallery
Retrieved from "https://wii.fandom.com/wiki/POW_Block?oldid=19863"
Community content is available under CC-BY-SA unless otherwise noted.