Start a Wiki
Mario Kart Wii (マリオカートWii Mario Kāto Wī?) is the sixth installment in the Mario Kart series of kart racing games, developed and published by Nintendo for the Wii. Mario Kart Wii was announced at E3 2007 by Nintendo of America president Reggie Fils-Aime. The game was released worldwide throughout April 2008, but one year later in South Korea.

Mario Kart Wii received critically positive reviews, with critics praising the online features and the large number of tracks, characters, and karts. It received an aggregate review score of 82.07% on GameRankings and 82% on Metacritic. In 2010, the game was included as one of the titles in the book 1001 Video Games You Must Play Before You Die. With 35.26 million copies sold worldwide as of December 31, 2013, the game is the second best-selling game for Wii and is the best-selling racing video game of all time.

Mario Kart Wii is the 6th installement in the Mario Kart series whcih was released on April 10th 2008 in Japan, April 11th 2008 in Europe, April 24th 2008 in Austrialia, April 27th 2008 in North America and April 20th 2009 in South Korea. Compared to past installements, new courses and items are avilable and it consists of 8 levels of grand prix, with 14 playable characters. There are also many game modes to play on such as Grand Prix, Time Trial and Vs.. This game is also supported by Nintendo Wi-Fi Connection which enables online acess to play against others from around the world in either a 1-12 player Vs. race, or Battle. You can also have a private room set up to play with just those who you have traded friend codes with. Mario Kart Wii also supports ofline play with friends with up to a 4 player split screen. Mario Kart Wii supports the use of the Wii Wheel, the Wii Remote & Nunchuck combo, the Classic Controller and the Gamecube Controller. Mario Kart Wii comes packaged with one Wii Wheel peripheral which can also be bought separately.

The game had a commercially successful launch in every region, and sold over a million copies in both Japan and the United States in less than a month. Overall, it is the second best-selling game for Wii at 34.26 million copies sold, after Wii Sports as of March 31, 2013. Mario Kart Wii is also the best-selling racing game of all time.

Some characters come with the game while others you need to unlock by progressing through the game (i.e, completing Grand Prix stages and obtaining trophies, ranks, or in the time trial by beating the stored Ghost Data). Below are weapons, known as items you can use.

CTGP Revolution is an expansion to and the direct successor of CTGP 2.8 and CTGP 4.4. It is a Custom Track Distribution created byMrBean35000vr and Chadderz. It is released as a Riivolution distribution. The CTGP Revolution pack continues the CTGP 4.4 trend of using custom course slots to load custom tracks, and is the first distribution to use a modified menu system to load tracks. The distribution supports the PAL,NTSC-U and NTSC-J versions of Mario Kart Wii. 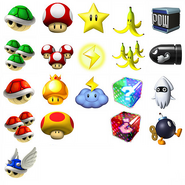 All the items in Mario Kart Wii.

Yoshi on a bike in 10th place in Coconut Mall.

Yoshi racing in Toad's Factory.
Add a photo to this gallery

Retrieved from "https://wii.fandom.com/wiki/Mario_Kart_Wii?oldid=21415"
Community content is available under CC-BY-SA unless otherwise noted.