Not to be confused with Fireballs, another name they are often mistaken as.

Lava Bubbles (also known as Podoboos) are fire enemies that appear in New Super Mario Bros. Wii, Super Mario Galaxy 2, Super Paper Mario, Mario Kart Wii, Mario Sports Mix, Mario Party 8 and Mario Party 9. Lava Bubbles are fire enemies, with a boo-like body. In New Super Mario Bros. Wii, they can be found in World 8. They appear in Lava. They jump out of the lava and dive back in again. They then repeat the process. Lava Bubbles are the enemies that appear in the Enemy Course of World 8. It starts from four Lava Bubbles, to six Lava Bubbles, to nine Lava Bubbles. They appear on World 8's bridge, and bumping into them triggers the Enemy Course. If Mario can time it, he can get past the bridge without having to worry about the Enemy Course. If Mario (or Luigi, Blue Toad, or Yellow Toad) touches a Lava Bubble (during the Enemy Course), he takes damage or dies at small form. They can be defeated by throwing ice balls from the Ice Flower or Penguin Suit or by running into one while under the effects of the Starman. Lava Bubbles are also found in World 2's Castle, and then in the castles of World 2, World 5, and World 6. You can say a Lava Bubble may be around somewhere, if you see lava. Podoboos are small enemies, however, probably half the size of Mario. In Super Mario Galaxy 2, Lava Bubbles appear in galaxies with lava, and once again, jump in and out of lava constantly. In Bowser's Gravity Gauntlet, due to the gravity, Lava Bubbles have the ability to jump from one lava pool to another. In Super Paper Mario, they jump in and out of lava pits in the Underwhere. They can be damaged in this game. The player can use Carrie to jump on them, use Boomer to explode on them, or hit them with Cudge. In Mario Party 8, the minigame Lava or Leave Em, requires contestants to dodge a Lava Bubble that splits into other Lava Bubbles. Also, when players land on a Bowser Space in Goomba's Booty Boardwalk, Bowser appears and surrounds the player with three Lava Bubbles. The player will have to jump in order to avoid them as they move towards the center (in attempt to burn the player) for ten seconds. The Lava Bubbles only try to hurt the player three times. The player will lose ten Coins if they touch one, and therefore, they can only lose thirty Coins at maximum. In Mario Party 9, some Lava Bubbles out of the lava in Magma Mine. A Mini Star constellation of them can be found at the Museum, though they are simply called Fireballs. In Mario Kart Wii, Lava Bubbles appear in the Grumble Volcano, Desert Hills and Bowser's Castle. In Grumble Volcano, the rocks that come from the volcano and hit the ground form massive Lava Bubbles. In Desert Hills, they are dropped by the Angry Sun and bounce on the racetrack. They will cause players to spin out if they come in contact with them. Finally, in Mario Sports Mix, teams must avoid losing possession in the Bowser's Castle court. If one team touches a Lava Bubble, they will get burned. 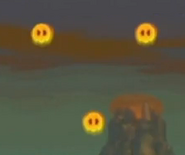 Three Lava Bubbles spawn by Bowser on Goomba's Booty Boardwalk in Mario Party 8.
Add a photo to this gallery

Retrieved from "https://wii.fandom.com/wiki/Lava_Bubble?oldid=19996"
Community content is available under CC-BY-SA unless otherwise noted.