Start a Wiki
The Key is an item in Super Smash Bros. Brawl. It only appears in The Subspace Emissary. A Key is used to unlock nearby doors. They break easily on higher difficulties. Enemies, fire, and traps will stop you, so you must be careful when carrying a key. Keys are glowing objects that shine similar to the shines of a Stock Ball, so they are easy to notice. However, they are small but bigger than Screw Attacks and Franklin Badges. Keys can be used for throwing at enemies, however, if you use them like that you'd have to go back to where you found it. Keys are also items in Super Mario Galaxy, New Super Mario Bros. Wii, Super Mario Galaxy 2, Super Paper Mario, Donkey Kong Country Returns and Kirby's Return to Dream Land. In Super Mario Galaxy, Keys are rare items and are only found in the Gateway Galaxy and Ghostly Galaxy. When collected, they automatically open locked doors or cause force-fields to vanish. A Grand Goomba in the Gateway Galaxy and a Boo in the Ghostly Galaxy hold a Key. The Key is dropped once Mario/Luigi defeats the enemy. In New Super Mario Bros. Wii, Keys are only encountered after defeating the boss of each world for the final time. They float in the air, which the player must jump to grab. Other than unlocking the next world, Keys do not serve any purpose in the game. Keys reappear in Super Mario Galaxy 2 having their same look from the prequel. Once again, they are incredibly rare items. They appear in galaxies such as the Haunty Halls Galaxy and the Battle Belt Galaxy. They also briefly appear in the Rolling Masterpiece Galaxy. Keys have the same effect when collected as in the prequel. In Donkey Kong Country Returns, there is a type of Key that can be purchased at Cranky Kong's Shop for twenty Banana Coins. When purchased, they will unlock a locked alternate route on the current world's map, allowing the Kongs (Donkey Kong and Diddy Kong) to reach other levels and take shortcuts. In Super Paper Mario, Keys are extremely common items. They appear in every level and are used to unlock locked doors. The type of Keys differ depending on the level. In Kirby's Return to Dream Land, Keys are found in a few levels and are used to unlock locked doors. They are usually held by Carry Dees, who attend to run away from Kirby (or Meta Knight, King Dedede, or Bandana Waddle Dee) with them. Some Keys are found alone and are guarded by pink Scarfies or red Degouts, who will chase the player after grabbing the Key (with the former transforming before doing so). When a Key is brought to a locked Door in Kirby's Return to Dream Land, the door will automatically unlock, similar to how Keys work in The Subspace Emissary. 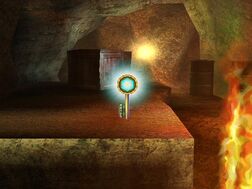 This is a Key found in The Cave during The Subspace Emissary of Super Smash Bros. Brawl. 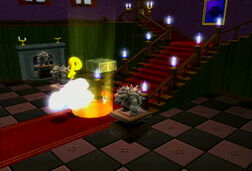 Mario has defeated the Boo in the Ghostly Galaxy, releasing the Key it was holding. This is in Super Mario Galaxy.

Mario has received a Key for defeating one of the Koopalings for the final time in New Super Mario Bros. Wii.

This is a Key found on the Pumpkinhead Planet in the Battle Belt Galaxy. This is in Super Mario Galaxy 2.

This is a Map Key as it appears in Donkey Kong Country Returns.

Kirby holds a Key in a stage (most likely in White Wafers or Dangerous Dinner). A Candle can also be seen in the picture.

A Key as it appears in Kirby's Return to Dream Land.
Add a photo to this gallery
Retrieved from "https://wii.fandom.com/wiki/Key?oldid=19532"
Community content is available under CC-BY-SA unless otherwise noted.