Start a Wiki
The Ice Flower is an item in New Super Mario Bros. Wii. It is the opposite of the Fire Flower. Ice Flowers are dark blue (outside) and light blue (inside). Press the 1 button on the Wii Remote to fire an iceball. Ice Flowers cannot directly kill an enemy. It instead freezes them. Mario (or Luigi, Blue Toad, Yellow Toad) can then pick up the enemies in the ice block (shake Wii Remote while holding 1 button) and throw it at an enemy or a wall to kill them. This is how you take out the Dry Bones enemies. However, not all enemies can be frozen (for example, Mega Urchins, Super Dry Bones, Thwomps, etc), nor can their Ice Blocks be picked up (for example, Stalking Piranha Plants' Ice Blocks cannot be picked up at all). Ice Flowers are common items. The Penguin Suit can also fire iceballs. Also, if Yoshi consumes a thrown Ice Flower ice ball, he can spit it out to create a large, "destructive" ice ball. The Ice Flower reappears in Super Mario Galaxy along with its fire counterpart (Fire Flower). Some galaxies it can be found in are the Beach Bowl Galaxy, Freezeflame Galaxy, and Deep Dark Galaxy. Like in New Super Mario Bros. Wii, touching an Ice Flower in Super Mario Galaxy turns Mario into Ice Mario, this time with him made entirely of ice instead of a red and blue outfit. As Ice Mario (or Ice Luigi), Mario/Luigi can run/skate across Freezing Water, regular water, or even Lava by creating hexagonal ice platforms over them. Like with the Fire Flower, the Ice Flower has a music that plays which gets faster the closer it comes to the Ice Flower's ending time, making the music a type of timer. Ice Flowers make a small, minor appearance in Mario Party 9 during King Boo's Puzzle Attack. They are in the puzzle table along with many other common Mario items. 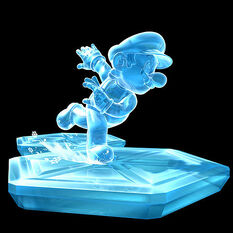 Ice Mario, as he appears in Super Mario Galaxy. 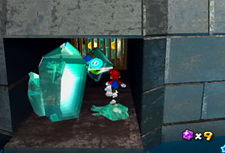 Mario runs toward an Ice Flower trapped in a glass cube under Baron Brrr's platform in the Freezeflame Galaxy of Super Mario Galaxy. 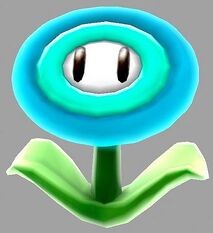 The Ice Flower's artwork in Super Mario Galaxy.
Add a photo to this gallery

Retrieved from "https://wii.fandom.com/wiki/Ice_Flower?oldid=16792"
Community content is available under CC-BY-SA unless otherwise noted.