Start a Wiki
Ice Blocks are items and obstacles in New Super Mario Bros. Wii. They are blocks made of ice. There are five kinds of Ice Blocks and four of them appear in World 3 (the fifth one appears in World 9-7 of World 9. The six kinds of Ice Blocks are those created when freezing enemies using the Ice Flower or Penguin Suit, small Ice Blocks that can be picked up and thrown at enemies (they cannot damage the player if thrown at them) to defeat them, giant moving Ice Blocks featured in World 3-4, which can defeat the player if it crushes them into a wall, a type of Snake Block made of Ice Blocks called the Ice Snake Block which appears in World 3's Castle, Giant Ice Blocks in the same castle that serve as obstacles and can only be destroyed using Bob-ombs and last but not least, the Ice Blocks that are found in World 9-7 that are freezing Coins and Munchers. Most enemies can be frozen and become trapped in an Ice Block using the Ice Flower or Penguin Suit. The player can then pick up the Ice Block with the trapped enemy and toss them into a wall or other obstacle to break the Ice Block and defeat the enemy or they can simply Ground Pound the Ice Block to receive the same effect throwing it. This is the only known way to defeat certain enemies such as Dry Bones. Not all enemies frozen via the Ice Flower/Penguin Suit can be picked up however. Some such as Stalking Piranha Plants and River Piranha Plants can be frozen but their Ice Blocks cannot be picked up. The only way to get rid of them trapped in their Ice Block is by Ground Pounding it (though River Piranha Plants are in water, which prevents their Ice Block from shattering). The Giant Ice Blocks trap Bob-ombs inside them in World 3's Castle. The Bob-ombs can only be freed by an exploding Bob-omb. The difference between the Ice Blocks that appear when an enemy is frozen via an Ice Flower and Penguin Flower and the Ice Blocks that have Munchers and Coins inside them is that from the beginning of World 9-7, the Munchers and Coins are found trapped in them. They are only freed using the Fire Flower or by a Venus Fire Trap's Fireballs. 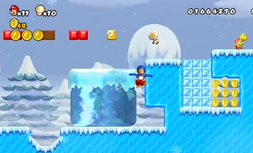 A giant Moving Ice Block defeats Mario after crushing him into a wall. This is in World 3-4.

These are the Ice Blocks that players can pick up and toss at enemies to defeat them.

These are the Giant Ice Blocks that trap Bob-ombs and can only be destroyed by an exploding Bob-omb. This is in World 3's Castle.

This is an Ice Bro. frozen in an Ice Block.

This is a Muncher trapped in an Ice Block.

This is a frozen Goomba trapped in an Ice Block.

Propeller Mario stands on some Munchers frozen in Ice Blocks in World 9-7.
Add a photo to this gallery
Retrieved from "https://wii.fandom.com/wiki/Ice_Block?oldid=18764"
Community content is available under CC-BY-SA unless otherwise noted.