A citizen of the Mushroom Kingdom who sided with Bowser when he invaded. Goombas slowly chase Mario on stubby legs. They're not the toughest creatures and can generally be defeated by jumping on them, which makes them disappear. They have fierce fangs, but they don't seem to serve any purpose. Though a nuisance to Mario, they're decent at baseball and mah-jongg.

This picture is a sprite of a Goomba from Mario & Sonic at the Olympic Games.

This is a sprite of a Goomba from Mario Super Sluggers. 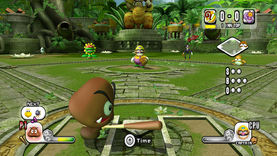 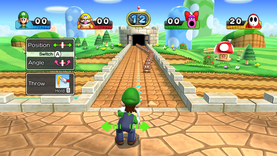 Luigi prepares to bowl in Goomba Bowling of Mario Party 9. 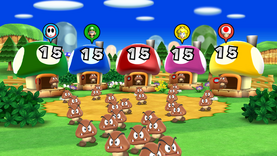 The number of Goombas are being counted at the end of the minigame, Goomba Village, in Mario Party 9. 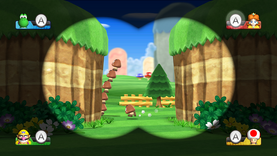 A stack of Goombas and a Goomba following behind run across the screen in the minigame, Goomba Spotting, of Mario Party 9. 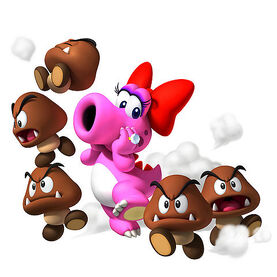 This is the artwork of Birdo in Mario Party 9, who is surrounded by five Goombas. 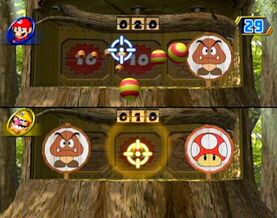 Two Goomba icons can be seen, as they appear in the minigame, Lob to Rob, in Mario Party 8. 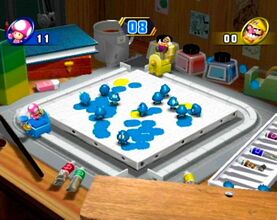 Many Goombas have been sprayed with blue paint. This is in the minigame, Paint Misbehavin', from Mario Party 8. 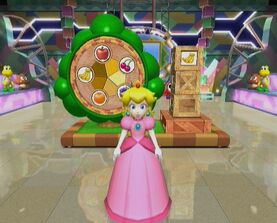 Look carefully (click the picture for a bigger, better view if needed). Two Goombas can be seen in the background. This is in the minigame, Fruit Picker, from Mario Party 8. 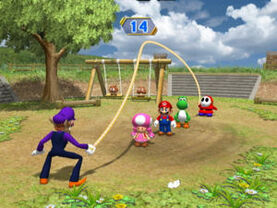 Look carefully (click the picture for a bigger, better view if needed). Three Goombas can be seen in the background. This is in the minigame, Chump Rope, from Mario Party 8. 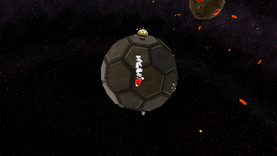 This picture shows a Round Goomba (the yellowish-tan creature on top of the planet) on the Starting Planet of the Battle Belt Galaxy in Super Mario Galaxy 2 (click the picture for a bigger, better view if needed). 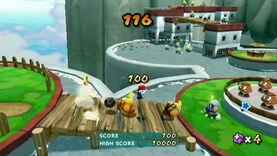 Mario jumps on some Octoombas in The Chimp's challenge in the Fluffy Bluff Galaxy. If the player looks to right of the picture (click the picture for a bigger, better view if needed), three Goombas can be seen. This is all in Super Mario Galaxy 2.

This picture shows a sprite of a Goomba from New Super Mario Bros. Wii.

This picture shows the official artwork of a Goomba from New Super Mario Bros. Wii, even though the Goomba looks way lighter and yellowish in this picture. 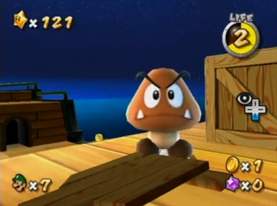 The player uses the camera to zoom in on a normal Goomba in the Good Egg Galaxy of Super Mario Galaxy.
Add a photo to this gallery
Retrieved from "https://wii.fandom.com/wiki/Goomba?oldid=20333"
Community content is available under CC-BY-SA unless otherwise noted.