This article is a stub. You can help Wii Wiki by extending this page.

Bowser is Mario's main villain, that tried to face Mario and his friends for many years.

Bowser's first appearance was in Super Mario Bros. the first Mario game made for the Nintendo Entertainment System or simply known as NES. At the end of every fortress, one of his minions would dress up like him and fight the player. This can be revealed by repeatedly shooting at the doppelganger with fireballs as Fire Mario The exception to this is in world 8-4, where it actually is Bowser. 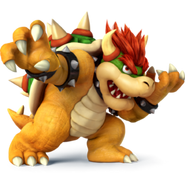 Bowser, as he appears in Super Smash Bros. For Nintendo 3DS and Wii U.
Add a photo to this gallery

Retrieved from "https://wii.fandom.com/wiki/Bowser?oldid=20145"
Community content is available under CC-BY-SA unless otherwise noted.