The Bob-omb is an item in Super Smash Bros. Brawl, and an enemy in the Mario series. These items explode when used. If left alone they will fuse themselves and walk around. Bob-Ombs can be picked up when they are about to explode. Some Party Balls give nothing but Bob-Ombs which can KO you if you attack them. Some Capsules play a similar role to when you get hit by a Bob-Omb's explosion. If you hit certain Capsules you will be sent flying similar to that of a Bob-Omb. Bob-ombs also appear in several other Mario series games for Wii: Super Mario Galaxy, New Super Mario Bros. Wii, Super Mario Galaxy 2, Super Paper Mario, Mario Super Sluggers, Mario Kart Wii, Mario Party 9, and Mario Sports Mix. In Super Mario Galaxy, Bob-ombs appear as enemies that appear in two different ways: the ones with feet which can move, which are less common, and the ones with no feet and do not move

Trophy Description for a Bob-omb in SSBB

A mobile bomb with a fuse on its head. It can be picked up and thrown as a powerful explosive, but if no one grabs it, it will tire of waiting and start wandering, then detonate whenever it likes. Its power and unpredictability make it an accident waiting to happen. In sudden-death matches if they go on too long, Bob-ombs rain from the sky to move things along. 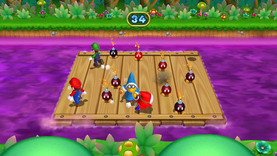 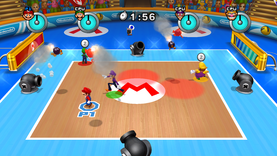 Players dodge Bob-ombs being fired from the black Cannons in Bob-omb Dodge of Mario Sports Mix. 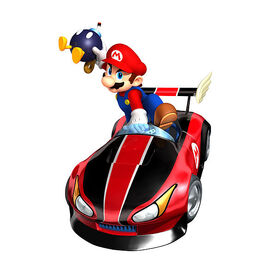 Mario holds a Bob-omb while drive a Kart in Mario Kart Wii. 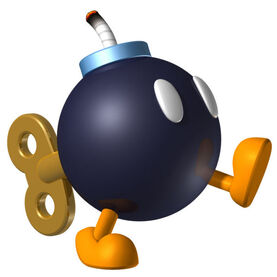 This is a sprite of a Bob-omb from New Super Mario Bros. Wii. 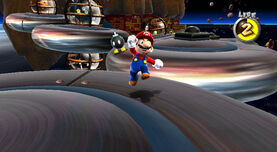 Mario jumps away from a Bob-omb on one of the Starting Planets in the Battlerock Galaxy of Super Mario Galaxy. 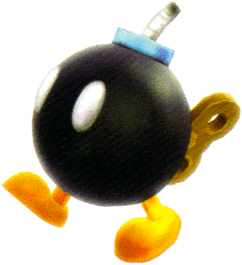 This is the official artwork of a Bob-omb from Super Mario Galaxy. 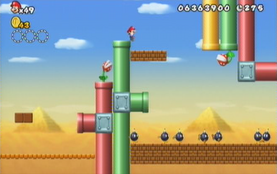 Many Bob-ombs can be seen on the Brick Block floor beneath Mario in World 9-4 of New Super Mario Bros. Wii.
Community content is available under CC-BY-SA unless otherwise noted.
Advertisement