Bloopers are enemies in New Super Mario Bros. Wii and items in Mario Kart Wii. They attack by spraying ink on the player blocking their eyesight. Bloopers look like squids with eyes on their front faces. They are all white in color. In Mario Kart Wii, if someone gets a Blooper as an item and uses it, all the players in front of the summoner, will be sprayed with ink. It is hard to see. Depending on what place your are in, if you are in 1st place, you'd be sprayed the most ink. Bloopers are rare items. You are more likely to get them from an Item Box, if you are below 6th place. In New Super Mario Bros. Wii, they are enemies. They make their most common appearance in World 4-4, even though they also appear in World 8-4. In World 4-4, appear hiding behind various objects such as seaweed or Warp Pipes and swiftly pop up when Mario and the crew nears/near them (a good way to dodge this since they appear so fast is to near its hiding spot close enough for it to appear but where it cannot hit the player. For example swim next to a Blooper hiding in a Warp Pipe). After appearing, they will slowly perform a spinning dance toward the heroes. If Mario (or Luigi, Blue Toad and Yellow Toad) touches a Blooper, he takes damage. There are also Baby Bloopers and Blooper Nannies, their sub-species that appear in the same game. Bloopers and their sub-species can be taken out from a Fireball from Fire Mario (or Fire Luigi, Fire Blue Toad, or Fire Yellow Toad) or by touching them while under the effects of the Starman. They can be frozen, but this is useless against them since there is no way to defeat a frozen enemy underwater unless its Ice Block collides into something hard such as a Warp Pipe or a hard ceiling. Bloopers also appear in Super Mario Galaxy and its sequel, Super Paper Mario, Mario Party 8, Mario Party 9, Mario Super Sluggers and Super Smash Bros. Brawl. Here in Super Mario Galaxy, Bloopers are enemies that appear in the Buoy Base Galaxy and the Deep Dark Galaxy. Here, when Mario/Luigi approach a Blooper, they will slowly spin towards the heroes, trying to chase them. It is possible for these squids to chase Mario/Luigi to the surface of the water. If Mario/Luigi touched a Blooper, they will lose one wedge of health from their Health Meter, causing the Blooper to release some ink (not as much as in Mario Kart Wii). Bloopers could be defeated by Spinning them or throwing a Green Shell at them. In Super Mario Galaxy 2, Bloopers only appear in the deepest pool of the Starshine Beach Galaxy's main planet (the deepest pool has the wedding cake-like object in it and surrounds the largest tower on the planet). They appear there in both of the galaxy's missions. Here, they behave just like they did in Super Mario Galaxy. In Super Paper Mario, Bloopers appear as common enemies in the Tile Pool, where they attack by following the player around trying to bump into them. Since Mario and Princess Peach have no useful attacks against the Bloopers when the Tile Pool is ventured through, players must use a Pixl or Bowser's fire breath to defeat the Bloopers. A very large Blooper known as Big Blooper appears as a boss of the Tile Pool. It uses it tentacles to attack and can be defeated by having Bowser breathe fire on the red tentacles. In Mario Party 8, Blooper is a playable character. He is unlocked by completing the Star Arena Mode and having the Blooper as the opponent in Bowser's Warped Orbit. However, if Hammer Bro is unlocked instead, the player must play the Star Arena Mode once more as Hammer Bro. In the game, Blooper floats just like Boo and uses two of his tentacles as arms. In Mario Party 9, a large Blooper appears as the stage boss of the Blooper Beach board. In the boss minigame, Blooper Barrage, players are on a ship shooting Cannonballs at it, trying to defeat it, while the Blooper every now and then jumps out of the water to throw Urchins at them. When the Blooper's health reaches halfway, the Blooper throws two Urchins at once instead of one. When defeated, he appears dazed in the water before exploding. In Mario Super Sluggers, Blooper in an unlockable playable character. He is on Mario's team, the Mario Fireballs. To unlock Blooper in Challenge Mode, players should go to the top edge of the dock in Mario Stadium from where the Warp Pipe is and where they saved Baby Luigi. They have to use Princess Peach to find Blooper and let it come out of the water. Blooper challenges players to a challenging mission before it joins their team roster. The scout mission is to get a double play with it at batting. Blooper can also be unlocked by completing all practice tutorials. His bat is solid white with a picture of its eyes on it. Blooper has the same exact stats as Baby Daisy. In Super Smash Bros. Brawl, the Blooper has its own Trophy.

A creature who's as squidlike as a squid can be. Bloopers patrol water stages, and with no notable weapons, their threat comes from their unique movements and speed. Some flying Bloopers display the same underwater movement above water. Blooper appeared for the first time as a playable character in Mario Party 8.

This picture shows the Blooper's icon in Mario Party 9. 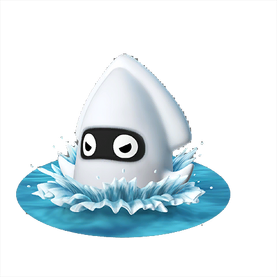 This picture shows the Blooper's artwork in Mario Party 9.

This is the Blooper's Catch Card (most likely) in Super Paper Mario. 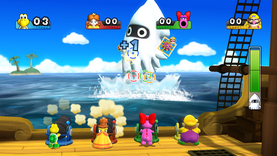 The Blooper jumps out of the water and prepares to throw an Urchin at players in Blooper Barrage of Mario Party 9. 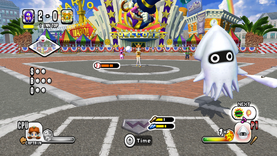 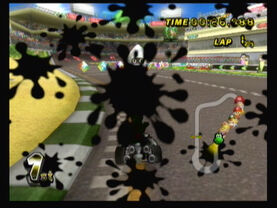 The Blooper sprays ink on the screen in Luigi Circuit of Mario Kart Wii. 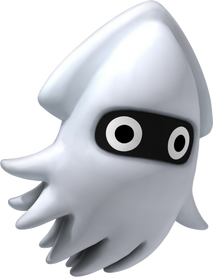 This picture shows the Blooper's official artwork in Mario Party 8.
Add a photo to this gallery

Retrieved from "https://wii.fandom.com/wiki/Blooper?oldid=20278"
Community content is available under CC-BY-SA unless otherwise noted.