Start a Wiki
Berries, also known as Apples, are items that appear in New Super Mario Bros. Wii and Super Mario Galaxy 2. They are apple-like fruits found growing on bushes (NSMB Wii) or on the ground (SMG 2). They can only be eaten by Yoshi, who eats them right when he touches them. That means, they only appear in levels/galaxies that Yoshi is encountered in. In New Super Mario Bros. Wii, they appear in a few levels. When Yoshi eats one of these, a number will say 1. It then counts as Yoshi continues to eat Berries until it reaches 5. Every five Berries Yoshi eats makes him produce a Yoshi Egg which hatches a Power Up. In Super Mario Galaxy 2, Yoshi can eat these by touching them or using his tongue. Each Berry Yoshi eats makes him produce a Star Bit. If ten Berries are eaten, one 1-Up is given to the player. There is also a large golden berry found in the Yoshi Star Galaxy. To eat this berry, Yoshi must grab it with his tongue and back away. When eaten, it gives a Launch Star and five Star Bits. There is also a Power-Up known as the Bulb Berry. When the Bulb Berry is eaten, Yoshi glows light for a short amount of time and can make invisible ground appear. The Blimp Fruit highly resembles a Berry, however, it is light blue, has a stem, and makes Yoshi fill up with air and float for a while. 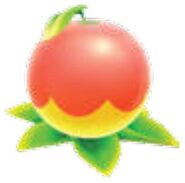 Add a photo to this gallery
Retrieved from "https://wii.fandom.com/wiki/Berry?oldid=13766"
Community content is available under CC-BY-SA unless otherwise noted.