Banzai Bills are a large sub-species of Bullet Bills that appears in Super Mario Galaxy and New Super Mario Bros. Wii. They have angry eyes, no arms, and a menacing mouth with shark-like teeth inside. In New Super Mario Bros. Wii, they are enemies. They were once the largest Bullet Bills, until King Bills appeared in World 9-8. Regular Banzai Bills make appearances in World 7's Fortress and in World 7-4. Banzai Bills appear either from unseen blasters or from a Banzai Bill Blaster. They just fly around slowly (much slower than Bullet Bills). They can damage Mario or any other member of the crew (Luigi, Blue Toad and Yellow Toad) if he touches them. Due to their size, Mario can use these enemies to reach higher places by jumping on them. However, he must have caution. Banzai Bills can be defeated by simply jumping on them. Much like other large sub-species of enemies, they can be frozen, but will bust out shortly after being frozen. A new, heat-seeking, sub-species of Banzai Bills, the Missile Banzai Bill appears in World 9-3, along with Missile Bills. In Super Mario Galaxy, they appear in Bowser's Galaxy Reactor, the final galaxy where Mario fights Bowser. They do not home in on Mario/Luigi, unlike Bullet Bills, however, they are still hard to dodge because of their size. To avoid them, Mario/Luigi must wait in small parts of the floor connected to the main floor and wait for it to pass by (or in some other situation and wait for them to pass by), or backflip over it. If Mario/Luigi gets hit by a Banzai Bill they will lose on wedge of health from their Health Meter, as well as be knocked down. In Super Mario Galaxy, Banzai Bills are indestructible, meaning they cannot be defeated. This is because they cannot be stomped on. Banzai Bills also appear in Super Mario Galaxy 2, where they can be mostly found in the Sky Station Galaxy, the first galaxy of the game, however, they also appear in Bowser Jr.'s Fearsome Fleet, the Fleet Glide Galaxy, and in Bowser's Galaxy Generator. They are fired from giant Banzai Bill Blasters (except in Bowser Jr.'s Fearsome Fleet where they are only fired by Megahammer. They only make an appearance in this galaxy during the boss fight with Megahammer). They still do not home in on the player, however, it is still difficult to avoid them due to their size and the narrow pathways they appear on (much like in Super Mario Galaxy). The same tactics used to dodge Banzai Bills in the prequel must be used to get past these large enemies in SMG 2 except in the Fleet Glide Galaxy where Mario/Luigi must pilot Fluzzard to move out of the way of the Banzai Bill (s). In SMG 2, Banzai Bills can be defeated by using the Rainbow Star and ramming into them, or by spinning the Spin Drill into them. Banzai Bills make a cameo appearance in Mario Strikers Charged Football. They appear in the Sand Tomb field, where they are painted on one of the pillars in the background. They have their Super Mario World appearance. A giant Bullet Bill similar to Banzai Bills named Big Bullet Bill appears in Mario & Sonic at the Olympic Winter Games as a rival. He is faced in the fourth world in Skeleton (Single Festival for Wii) and Bobsleigh (Team Festival for Wii), as well as in Blazing Bobsleigh in the DS version. When defeated, Big Bullet Bill flies away and does not explode.

This is a sprite of a Banzai Bill in New Super Mario Bros. Wii. 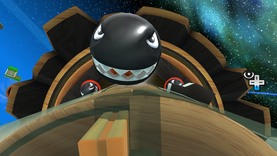 This is a Banzai Bill surrounded by other Banzai Bills being fired on the Sky Fleet of the Sky Station Galaxy. 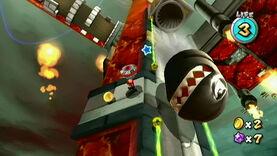