Start a Wiki
Apples are items that appear in Super Mario Galaxy, Super Paper Mario, Mario Sports Mix, Super Smash Bros. Brawl, Kirby's Epic Yarn and Kirby's Return to Dream Land. As the name suggests, they are apples that usually red. In Super Mario Galaxy, three Apple Planets appear in the Gusty Garden Galaxy. The planets are inhabited by Flipbugs, Boulders and Wigglers. There is a worm here that is eating the apples. In order to proceed, Mario/Luigi must Ground Pound the correct wooden pegs to make the worm burrow through each of the three Apple Planets. At the third Apple Planet, Mario/Luigi can take a Launch Star to the next planet/planets. It is to note that one of the Apple Planets is a green Apple, while the other two are red. There is also a Bitten Apple Planet in the Good Egg Galaxy, which is simply a large, green Apple Planet that has been badly bitten out by an unknown creature. This creature does not appear in the game. In the center of the Bitten Apple Planet is a Black Hole, which must be avoided. In Super Paper Mario, Apples are known as Red Apples. There are also new types of Apples in the game including the Black Apple which is known as the taboo fruit, the cursed Golden Apple, the mustache-growing Yellow Apple, the fruit-transforming Pink Apple and the size-shrinking Blue Apple. All apples, excluding the Black Apple, restore five HP when eaten. The Black Apple only restores 1 HP when eaten on a playable character. The apples' above powers only work on non-playable characters. The Primordial Fruit, which is introduced earlier than all the apples in the game, resembles an Apple in this game, but the relation between the two is unknown. In Mario Sports Mix, Apples are one of the items that must be fed to Petey Piranha during the basketball minigame, Feed Petey, alongside oranges and Watermelons. Apples are worth thirty points if they are shot into Petey Piranha's mouth. In Super Smash Bros. Brawl, Apples are rare items. They only appear on the returning stage from Super Smash Bros. Melee, Green Greens. On this stage, Whispy Woods will occasionally drop Apples as one of his attacks. These attacks can be eaten to replenish a little bit of the player's health, thrown at opponents, or thrown towards the ground to cause them to explode and impact Damage and Knockback to nearby opponents. Also, if Mr. Game & Watch hits an opponent with his Judge hammer holding a sign with the number 7, an Apple appears. Apples also have their own Trophy in Super Smash Bros. Brawl. It is to note that Apples also appeared in Super Smash Bros. Melee, since Whispy Woods first appeared in that game. In Kirby's Epic Yarn and Kirby's Return to Dream Land, Whispy Woods drops Apples as one of his attacks. They will cause damage to the player if he is hit by one. In both games, despite Apples being a type of Food, they cannot be eaten to replenish the player's health. In Kirby's Return to Dream Land, Kirby can Inhale Apples and spit them back to Whispy Woods to damage him, while in Kirby's Epic Yarn, Kirby must simply avoid them since they cannot be used to defeat Whispy Woods. This is because Kirby is in his Tankbot form during this battle. It is to note that Apples only appear during Whispy Wood's battle in Whispy's Forest of Dream Land in Kirby's Epic Yarn, and Cookie Country of Kirby's Return to Dream Land, as well as in EX Mode. Poisonous purple Apples are dropped by Whispy Woods in Kirby's Return to Dream Land along with regular red Apples. He can also drop large versions of Apples as well. In Kirby's Epic Yarn, Ookis will also throw Apples at Kirby/Prince Fluff in his Tankbot form before the battle with Whispy Woods. The Apples can damage the Tankbot if they collide into it.

Fruit that falls from above when you're battling Whispy Woods. Kirby can suck them up and spit them out as useful projectile weapons. They're nice to have around when you don't have any Copy Abilities, but they do damage when they hit you so they can be a bother too. They offer no ability when swallowed. These apples are not produced by Whispy Woods.

The three Apple Planets in the Gusty Garden Galaxy of Super Mario Galaxy. 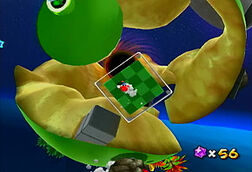 The Bitten Apple Planet in the Good Egg Galaxy of Super Mario Galaxy.

Some Apples and Oranges can be seen hanging on wires above DK Dock in Mario Sports Mix. This is during the basketball mini game, Feed Petey. 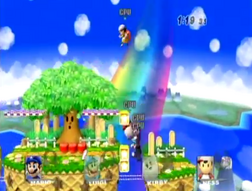 Ness, Mario, Luigi and Kirby battle each other on the Melee stage Green Greens in Super Smash Bros. Brawl. If you look closely, Whispy Woods has dropped three Apples onto the stage.

An Ooki throws some Apples at Kirby in his Tankbot form in Whispy's Forest. This is in Kirby's Epic Yarn.

Kirby in Tankbot form shoots missiles at Whispy Woods while the boss drops Apples at him. This is in Whispy's Forest in Kirby's Epic Yarn.

Whispy Woods drops Apples while Fire Kirby attacks him. This is in Cookie Country of Kirby's Return to Dream Land.

Whispy Woods drops a poisonous purple Apple during EX Mode in Kirby's Return to Dream Land. Whispy Woods is not shown in this picture, however. 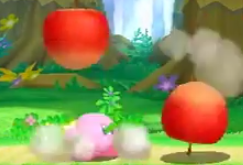 These are some giant Apples that have been dropped by Whispy Woods during EX Mode in Kirby's Return to Dream Land. Notice how these Apples are bigger than Kirby himself, as shown in the picture.
Add a photo to this gallery

Retrieved from "https://wii.fandom.com/wiki/Apple?oldid=19554"
Community content is available under CC-BY-SA unless otherwise noted.